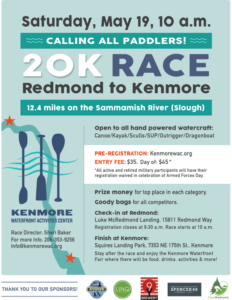 Kenmore Canoe and Kayak Team is looking for a head coach for the 2017 racing season. This is a part-time position for someone knowledgeable in canoe/kayak with experience as a youth coach. Please see our job description for complete information 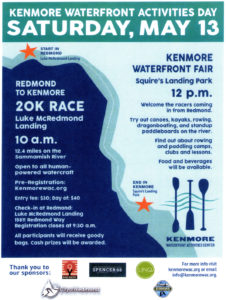 Racing and other water activities at Squire’s Landing Park.

Interested in racing? Visit our race page for details.

Check out our waterfront fair page for all other activities.

Come connect with our waterfront!

The day started cool and wet, but spirits of racers and organizers were high. Good job by all and everyone had fun! 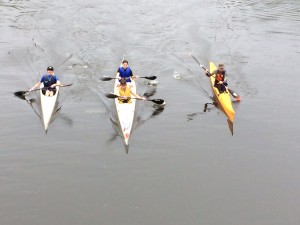 Paddling under the Juanita bridge

After you’ve enjoyed our waterfront fair on May 14, up your participation by joining us in our distance race on the 21st. Start in Redmond and finish in Kenmore, and the good news is it’s all downstream! Sign up now and save!

Come enjoy an afternoon paddling with your children (if you don’t have children come anyway).

Since many children are out of school with the Veteran’s Day holiday, we thought it’d be fun to have a hot dog BBQ and paddle just because.  We may have some mini races or perhaps even a scavenger hunt on the water.

If you’re interested or have some fun ideas let us know. If you could let us know how many will be in your group that will give us an idea of how much food to get. Also if you have a paddle and/or a folding chair bring them as well. Contact us at info@kenmoreWAC.org.

Since this is very last minute KWAC will provide the hotdogs and buns if you would bring chips or a dessert to share.  The weather will probably be rain but we have that covered!

Hope to see you!

Save the Date! June 27 is Olympic and Paralympic Day in Kenmore! There will be racing and activities all day long. Check our race information page for race details. Check the City of Kenmore site for all other activities. Come play in Kenmore!

May 24 & 25th saw K~C in Oklahoma City for US Team Trials.  Races were conducted on this international course over 200, 500 and 1000 meters.  Six K~C athletes vied for positions on the US Team – Doug Ritchie, Emmanuel Beauchard, Ben Karlinsey, Spike Kane, Hannah Pennington and Alana Nichols.  Sheri Baker and Dan Henderson were there to support the athlete’s efforts.

Alana Nichols and Hannah Pennington placed 1st and 2nd respectively in the K-1 Woman Para KL2 (use of arms and torso but not legs) class in times of 1:05.125 and 1:05.363.  These places and times qualified both for starts at the Duisburg, Germany World Cup regatta next month.

While both Doug and Spike raced well, they did not, nor were they expected to, qualify for berths on the US Team.  The great value in their competitive experience was to learn more about USACK and the Trials process and understand the K~C development needs.

“All our goals for this trials were met,’ commented Kenmore~Cascade Head Coach Dan Henderson.  ‘The team really stepped up and had a great showing.  We couldn’t be more pleased.  Ben was competing for a spot in the K-4 – exactly where we hoped he would be selected.  Hannah and Alana are headed for World Cup in Duisburg, Germany.  Emmanuel has been selected to the U23 team for World Championships and did so well, he was selected to race K-1 Men Senior at the Duisburg World Cup.  It’s just solid all around.  Thanks to the entire KWAC and Kenmore community for your support, we couldn’t have done this without you!” 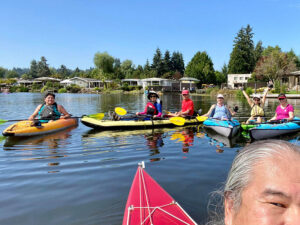 For details about the club, go here...

The Kenmore Waterfront Activities Center would like to reach out to property owners on the river to see if you might be able to “host” all or part of our paddling clubs. This is due to the upcoming renovations at Squires Landing Park which are set to begin June 1st and are planned to last 2 years. The clubs impacted would be the Seattle Flying Dragon Boat Club-(SFDBC), the Kenmore Canoe and Kayak Club-(KCKC) and the Hui Wai Outrigger Club-(HWOPS). There are also 34 community paddlers who have kayaks on racks that hopefully can be accommodated somewhere with river access.

The hope would be for all of us to move together however we’re more than happy to split up. A little about each club:

SFDBC-Currently with COVID-19 no practices are planned until approximately 2022. There are 4 dragon boats with approximately 10 to 15 paddlers at each practice, which happens normally 3 times a week. The ask here is a place for the 4 dragon boats. If they can be out of the water until next year that works.

KCKC-This program is in a restructure process and meets once a week with several paddlers. Since social distancing is easily accomplished, this program is the most likely to have regular practices once the weather warms. There would be approximately 5-6 paddlers a practice and that may be up to 3 times a week.

HWOPS-The outrigger canoe group has two 6-man canoes, which aren’t being used during COVID-19. There are two smaller canoes, a one-man and a two-man, which are used weekly. During normal times they practice 3 times a week. If you have questions or suggestions, please send an email to info@kenmorewac.org or call 206-353-9256.